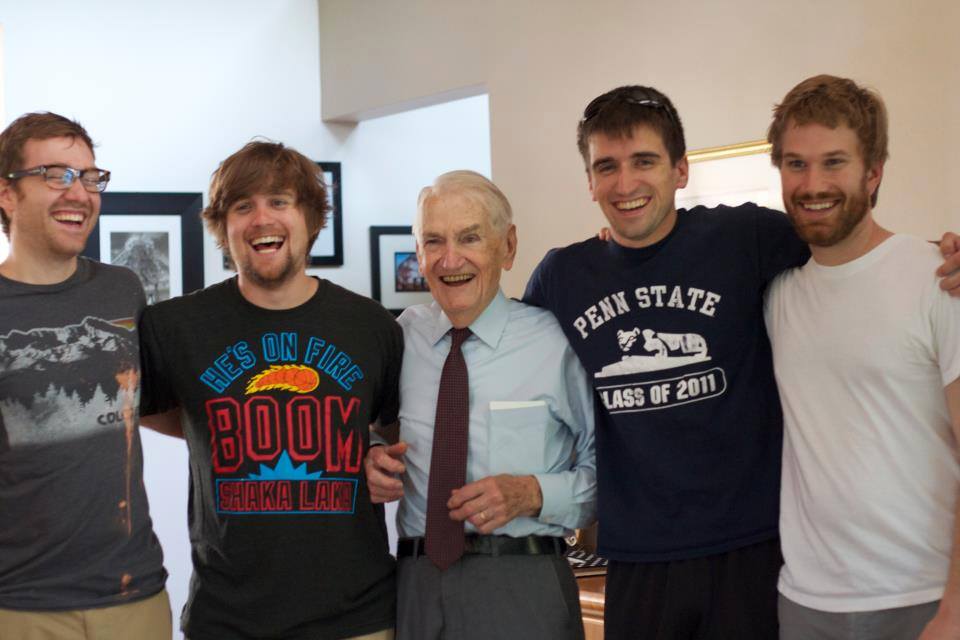 To me and many of his other grandchildren: “Gramps.” 7 children. 13 grandchildren. 10 great-grandchildren and soon to be 11. He wouldn’t have it any other way as he showed how much he loved his family every single day. His love for his wife, family, and life in general was out of this world.

He was married to my Gram for 62 years before she passed away. They met at Mercy Hospital in Pittsburgh, as she was a receptionist there when he worked there. They took in extended family members who were struggling and treated them like their own. Their love and respect for each other are a stunning example of true love. They are both true role models of mine.

Gramps’ storytelling skills are the best I’ve ever seen, drawing in both the oldest and youngest family and friends to quiet down to lend him their ears. From him and his brother creating scuba helmets out of cut-out, old rusty barrels and going down to the creek to test them out in Patton, PA to their family cow getting loose and ending up at the movie theater in town, his stories never got old, no matter how many times he told them.

His humor. Holy shit. He will always be the funniest person I will ever know. His laughter and happiness was infectious.

He enlisted in the military during WWII and was stationed in Washington and Alaska.

He was a doctor for over 50 years, starting off in general medicine as one of the few doctors in the North Hills of Pittsburgh and eventually transitioning to an eye doctor in the 1950s. He wasn’t your doctor-of-today though. He would have to make house-calls in the middle of the night to deliver babies while old Miroslav (or insert Slovak name) would be revving his motorcycle in the basement. His payment: $25 – $30 for twins or manure for his garden sometimes. He was my eye doctor for a good portion of my life. He would have people come up to him and church, thanking him for taking care of their sick family member or delivering their child.

He was an entrepreneur and incredibly creative, always building or fixing something. He loved riding up and down the hill in his backyard on his tractor. He loved it so much that he fixed the same tractor for at least 3 decades. He built a dirt tennis court in the backyard along a steep hill and put in an in-ground swimming pool by directing a natural spring to fill it. It was 60 degrees when we’d swim in it, but we didn’t care because it was a blast. The spring would also keep our pop cold while we swam.

He was a musician, playing songs on the piano with my Gram or upright bass with his family and friends in the backyard. They both definitely ingrained the music bug into me and much of my extended family.

He was an insane cross-country runner, running at Franklin & Marshall. Him and his team were honored in the early 2000s for their championship in the early 1940s.

He accomplished so much in his long, almost 95 year old life, but yet he was so humble. He never had to brag, but the people who he surrounded himself with know how incredible he was. They know they were lucky enough to spend time with him. I know I was lucky enough to spend 29 years with him. His stories, lessons, compassion, and impact on so many people’s lives will continue on with the people he touched so deeply. Your memories will forever stay with me. I’m proud to call you my Gramps. You are an inspiration to us. While I am sad you are gone from this Earth, I am so happy you are reunited with your true love, Gram, in heaven.

“Here’s a dollar. Go buy yourself a root beer.”